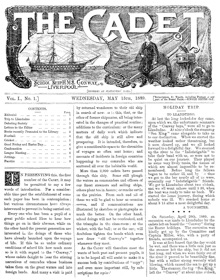 From 1898 to 1974 Conway produced a magazine called The Cadet. It was generally produced at the end of each term but less frequently during the two world wars. The cover of the first edition is on the right. The cover changed from time to time.

As well as a detailed record of the term’s events it provided extensive information describing the travels and vessels of old boys, visits to the Ship by old boys  and correspondence from them. Old boys subscribed to the magazine but it was produced by the Ship primarily for cadets.

When the Club was formed – largely as a result of initiatives in The Cadet – it was decided to continue using The Cadet for news about Old Conways and to publicise and document Club dinners and activities.

When Conway paid off in 1974 the Club was left with no simple means of mass communication with its members. That untenable state of affairs was soon remedied by the introduction of the Club’s own Newsletter. Obviously at this point the Club had to assume full production responsibility and pay all costs so initially it was a modest affair on stock paper with the occasional image. Over time it grew in size to 40-50 A5 sides with a few B&W images, produced twice yearly. Its publication was much anticipated and eagerly read by OCs. It continued in this format until 2008. Online copies are in the Members pages click here. 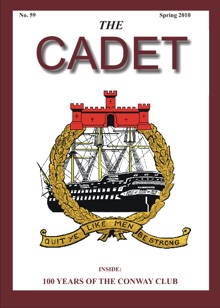 In 2008 the committee decided the time was right to improve production standards for the Newsletter and to increase the number of pages. It was rebranded as The Cadet and it’s cover echoes the format of final issues of the original magazine. It is published twice a year in Spring and Summer. It is full of information on social events, news on the activities of Old Conways around the world, obituaries and graphic reports from the personal history of Old Conways. While the changes inevitably drove up production costs the new format has been well received and widely acclaimed. In 2018 it changed from an A5 format to A4. The cover a recent issue is on the right. Online copies are in the Members pages click here.

The Editor is Nick Hambleton (63-66) and the publisher is Saron Publishers run by Penny Reeves, wife of Mike Reeves (56-59). She kindly works very hard on our behalf so if you have any publishing needs please visit her website – click here

The Editor welcomes contributions from OCs so if you have anything you’d like to share; letters, reminiscences, news, photos etc., are all welcome. Closing dates for copy are:

Contributions received after those dates will be included if possible.

Copy for the Newsletter can be emailed to the Editor Nick Hambleton (63-66) click here.

Welcome to our website. If you continue to browse and use this website, you are agreeing to comply with and be bound by the following terms and conditions of use, which together with our privacy policy govern The Conway Club’s relationship with you in relation to this website. If you disagree with any part of these terms and conditions, please do not use our website.
The term ‘The Conway Club’ or ‘Conway Club’ or ‘us’ or ‘we’ refers to the owner of the website.