From 1859 old boys kept in touch through the ship’s termly magazine, The Cadet, which included letters and long lists of appointments, promotions and sightings. The first call for an old boys’ club was in February 1890 when Captain Miller offered to organise a dinner if their was sufficient interest.

That resulted in the first ever formal gathering of old boys on Thursday 18th September 1890 at the Adelphi Hotel, Liverpool. It was attended by 11 OCs, all the members of staff and the guest of honour, Mr Little, editor of the Journal of Commerce. It was judged a great success and all present looked forward to similar events in the future. The second dinner in 1891 drew 51 OCs but annual dinners proved difficult to sustain and they petered out in the early 1900s.

In October 1902 The Cadet carried a proposal to “form an ex-Conways Association” and to purchase a private meeting room in Liverpool where members could meet (instead of the MMSA’s meeting rooms which were open to old boys). Subscriptions would be 2/6d for apprentices and 5/- for captains. For unknown reasons the idea never get off the ground.

In October 1905 an old boy using the pseudonym ‘Don Q” bemoaned the use of the term ‘ex-Conway’ because it sounded too like ‘ex-convict’. He suggested that ‘Old Conwayians’ or ‘Old Conways’ be adopted. The Editor of The Cadet agreed and from thenceforth we became ‘Old Conways’. 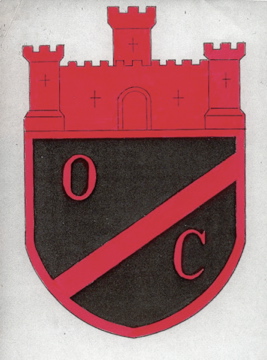 On 7th August 1907 an OC writing under the pseudonym “DN” wrote from RMS Carpathia at New York proposing that an OCs’ blazer badge be introduced. The idea was taken up and the badge went on sale through the Sailors’ Home in October 1907. It was a navy blue shield outlined in red with the letters OC surmounted by the castle from Conway’s crest, both in red. The badge has evolved through at least five variants over the years to that which we currently use. The Club tie with its red castle motif was introduced on July 18th 1938.

In October 1908 with Conway’s 50th anniversary looming, the idea of forming an old boys’ club with its own premises was resurrected but was judged too ambitious so a simple association was proposed. It would hold an annual dinner and provide an address list so that old chums could more easily contact each other. Independent of this proposal it was announced that, if enough interest was forthcoming, a dinner for Old Boys would be held in Liverpool in April 1909. 77 OCs decided to attend and the dinner was held on 3rd April 1909 at the Exchange Station Hotel, Liverpool. The meal cost 6/- and the ring of the day was morning suits. It proved extremely popular so the idea of an annual dinner was established. A second dinner was held in May 1910. Annual dinners were held in Liverpool until 1921 when it was held in London. From then on it alternated between Liverpool and London. In 1964 the New Block at Plas Newydd was added as a third alternating venue. In approximately 1977 the Committee decided that dinners should be held more widely around the UK, a practice that continues to this day.

The Conway Club was formed in June 1910 by Captain H W Broadbent RD RNR (1880-81)who was  the ship’s Captain Superintendent. He was awarded the honorific “Founder”. OCs were invited to become members for an annual fee of 2/-. The primary object was “to enable Old Boys to keep in touch with one and other”.  Each member would receive a copy of the Members’ Address List each April. Pending a formal meeting Captains E Cleaver (1885-87) and J Hutchinson (1899-1901) volunteered to act as joint Hon Secretaries and Captain H W Broadbent RD RNR (1880-81) as Hon Treasurer.

The club’s inaugural meeting was on Tuesday 13th December 1910 at the Officers’ Rooms, The Seaman’s Institute, Hanover Street, Liverpool. Major Sir Hamilton Goold-Adams (1871-73)was elected the first President (see right) – a post he occupied for 10 years. Capt T Y Powles (1860-61) (of the Powles Cups) was elected the first Vice President. Captain J Hutchinson (1899-1901) was elected as Hon Secretary, Captain H W Broadbent RD RNR (1880-81) was elected Hon Treasurer and there was a committee of 20 OCs. The Club was formally named The Conway Club and its address was given as 22 Canning Place, Liverpool. It was estimated that there were 4,000 OCs around the world but the Club was founded in June with just 40 members. By 31st December 1910 there were 100 members with numbers increasing fast as news spread around the world. By its first anniversary in December 1911 membership stood at 250. Numbers doubled each year for the next few years. Today we have just over 1700 members.

Then, as now, OCs were living all around the world so there were immediate requests to set up branches abroad including from Australia and Nigeria. The very first club branch was actually formed in 1912 on the China Coast (influenced by the number of OCs in the Chinese Maritime Customs Service). India followed suit soon afterwards (probably influenced by the large number of OCs in the RIM and Bengal Pilot Service), Toronto in 1932, Nairobi (a joint Conway/Worcester branch) and Singapore both in 1934 and Vancouver in 1938. Despite their early support an Australian Branch was not formed until 1954. Similarly there was a move to set up branches around the UK and the first one, in 1922, was a monthly Luncheon Club in London which the founders called “The Seven Seas Club”. It met at the Petit Riche Club, 44 Old Compton Street. The first UK branch proper was formed in the West Country in 1930. It met at the Vicarage, Bishopton, Bristol.

Welcome to our website. If you continue to browse and use this website, you are agreeing to comply with and be bound by the following terms and conditions of use, which together with our privacy policy govern The Conway Club’s relationship with you in relation to this website. If you disagree with any part of these terms and conditions, please do not use our website.
The term ‘The Conway Club’ or ‘Conway Club’ or ‘us’ or ‘we’ refers to the owner of the website.